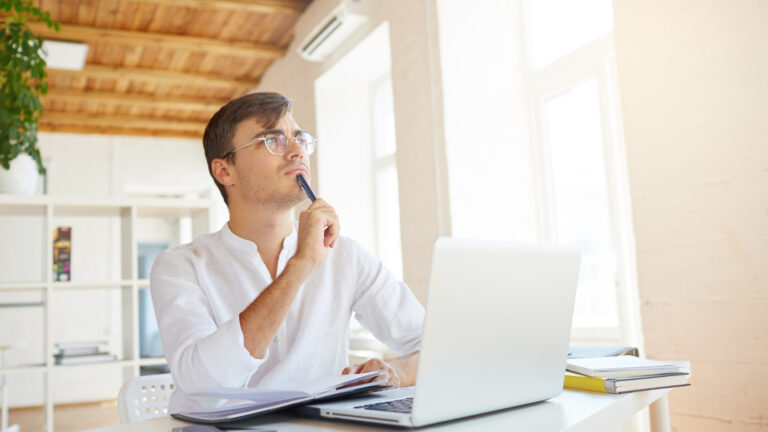 A strong history paper begins with a comprehensive thesis. You need to ask yourself when you sit down to write what it is that you are trying to say in the paper, and how you plan on saying it.

As an example, let’s make up a term paper topic: “The Great Depression in the United States.” This is not simply a historical interpretation of what happened during this time period — that would be too broad. Asking the question, “What was life like in America after 1929?” is too general because everyone would have their own opinion, so it also isn’t narrow enough to answer effectively by writing a research paper.

Instead, consider making this your thesis statement:

“The actions taken by President Roosevelt’s administration were largely responsible for turning the tide of public opinion surrounding the Great Depression.”

This is a thesis that you can successfully argue in an essay. It’s strong because it limits what your argument can entail (focusing on FDR) and allows you to narrow down the scope of what happened during this time period (not everyone experienced it the same way, but there were trends).

Your paper should not be trying to prove anything; instead, it should analyze the facts and make one convincing case for why your interpretation of them is correct. You need evidence to back up your claims — this evidence comes from research. All papers need three types of sources in order to complete the assignment well: primary sources, secondary sources, and tertiary sources.

Primary sources are materials that were written or created during the time period you are studying. For example, if your paper is about World War I, these would be diaries from soldiers who witnessed first-hand what was going on, memoirs from generals and politicians involved, propaganda churned out by all sides of the conflict to justify their respective causes, etc.

You should try to use as many primary sources as possible for your paper — they give a unique insight into the events that occurred. One common mistake people make when citing them is only using one or two at most; each one brings a different perspective and allows you to investigate history from multiple angles.

Tertiary sources are works of scholarship where other scholars have summarized the conclusions made by other experts who have analyzed primary and secondary sources. These include encyclopedias, textbooks, online repositories of research material (such as JSTOR), etc. They are especially useful because they condense sometimes lengthy explanations into a convenient format for quick reference.

As your paper goes on, be sure to weave in quotes from your sources to evidence your claims. If you don’t do this throughout the essay it will come off as stilted and hard to read–it doesn’t sound like you’re talking to the reader, but instead like you are reciting facts. It’s fine to use quotations (which should be in MLA format) sparingly, but make sure you don’t neglect them entirely.

Avoid writing phrases or sentences that can easily be misinterpreted; if you cannot take them out of context and still make sense, they probably should not be included. If someone else read your paper and said something along the lines of “I didn’t understand this sentence,” then it needs revision because it is confusing or unclear. You want your argument to be as straightforward as possible so that readers will actually take away something from your essay rather than misunderstanding what you are trying to say.

The conclusion of a history paper should include a brief restatement of the thesis statement. It should directly relate back to all of the evidence you used throughout your paper. One common mistake that people make is writing about totally different topics in their conclusion; this makes it seem like you were unsure what to write at first and then decided to go off on a tangent towards the end.

This is a good example because it ties in neatly with everything else I’ve written thus far:

In conclusion, FDR’s New Deal helped turn public opinion from hopelessness to optimism during the Great Depression. The government’s relief programs provided much-needed aid for Americans who had fallen on hard times, while also bolstering consumer confidence by putting money back into circulation. The broad support his policies received helped ensure his reelection, ensuring that they would continue. While FDR’s New Deal did not end the Great Depression by any means, it was one of the most important parts of restoring faith in American capitalism throughout the nation.

Here are some examples to make this more clear:

FDR’s New Deal succeeded in turning public opinion from hopelessness to optimism during the Great Depression because its programs provided much-needed aid for Americans who had fallen on hard times. The broad support his policies received helped ensure his reelection, ensuring that they would continue. Although FDR’s New Deal did not end the Great Depression by any means, it was one of the most important parts of restoring faith in American capitalism throughout the nation.

If you could change one thing about this article, what would it be?

I would add more examples to the introduction (maybe 3-5). The conclusion seems somewhat weak; I’d like to see how you explain why FDR’s New Deal was important beyond just stating that it restored faith in capitalism.

I hope these tips are helpful! Thanks for reading.